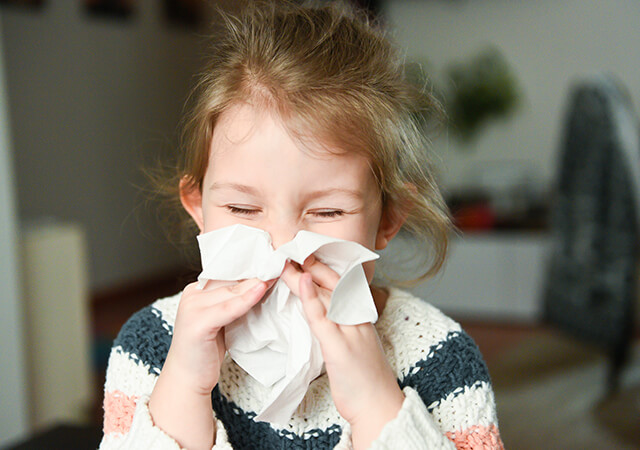 Reoccurring respiratory tract infections (RTIs), what we refer to as ‘colds & flu’, are any parent’s nightmare especially when one seems to just roll into the next!

Why is my child always sick?

Reoccurring respiratory tract infections (RTIs), what we refer to as ‘colds & flu’, are any parent’s nightmare especially when one seems to just roll into the next! These are particularly a problem when simple colds turn into something more serious and our children develop one of the dreaded ‘itises’, you know who they are…sinusitis, otitis, pharyngitis, tonsillitis, bronchitis, bronchiolitis… or even the most serious, pneumonia. Medically these are known as ‘complications’ and are usually caused by secondary bacterial infections. Why ‘secondary’ you might ask? This is because most ‘colds & flu’ start off as a viral infection. There are many different respiratory viruses that do this, these are simple yet very clever organisms in that when they infect our airways and cause colds & flu, they also open the doorways for bacteria to join in and complicate the infection. This is when the itises mentioned above occur and of course when antibiotics are prescribed.

Children are particularly vulnerable to RTI’s for obvious reasons; firstly and most obviously, their immune systems are less mature and still developing, but there is more to it than this. Our children, especially the younger ones, are very much naïve to germs, personal space, washing hands etc. Innocence is bliss! They also spend their days in large groups and in close proximity to others. Unfortunately, this makes the classroom a perfect ‘super-spreader’ event on a daily basis, especially in winter with all the windows closed!

What about the complications though, why do they keep getting those each time? Did you know that young children have narrower air passages, making them more prone to congestion and blockage, plus their sinuses also don’t fully develop until age 7? Toddlers and infants of course can’t blow their noses or cough up built-up phlegm yet, so the mucus stubbornly just persists for weeks and is a perfect breeding ground for opportunistic bacteria!

Antibiotics certainly have their place for serious bacterial RTIs, the emphasis being on the words ‘serious’ and ‘bacterial’ – remember that most colds and flus are caused by viruses, not bacteria, and viral infections don’t respond to anti-biotics which are designed to kill bacteria. Secondly, world-wide many common bacteria are now becoming resistant to antibiotics leading to the development of ‘superbugs’ which is largely due to overprescribing. Ideally, antibiotics are meant to be used only in confirmed bacterial infections and when really necessary so as to preserve their effectiveness. Many studies confirm that internationally the most common reason for prescribing antibiotics are for respiratory infections and even more so in children with RTIs, despite most of them being viral infections! Over prescribing of antibiotics not only leads to resistant bacteria, but if given unnecessarily or too often, they harm the billions of healthy bacteria in the digestive system known as the ‘microbiome’ – ironically, a healthy microbiome is essential for immune function overall, so hammering the microbiome unnecessarily could in fact lead to further immune weakness. Probably the best thing to do is prevent the need for antibiotics in the first place by preventing secondary bacterial infections?

There are hundreds of immune support products for children out there, how does one choose the right one?

Ideally, we want a product that’s proven to both prevent RTIs and reoccurring RTIs in general, but even more so one which can also prevent the secondary bacterial infections, and of course it needs to be safe for our children to take! Now that we understand how unique this problem is to children and how they are particularly vulnerable compared to adults, we can also appreciate that remedies proven on adults aren’t necessarily going to work as well in children. So logically any product for the prevention and treatment of RTIs in children should firstly be proven to work in children!

Taken preventatively for 4 months during winter at a dose of 1 tablet three times daily, Echinaforce Junior was shown to: 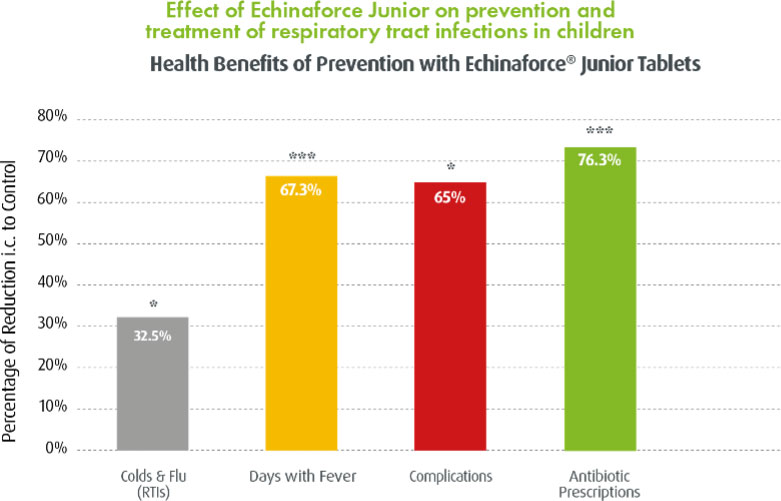 ← The brain, the hungriest organ of the body The circulatory system and its potential problems →